Overwatch is one of the biggest FPS esports games in the world, the fast pace of the game and different types of heroes&maps as cool as it is might sound, creates a lot of questions and concerns in the head of many players, we would like to shed some light on that topic and help you with it.
We want to focus on covering pretty much every aspect: game modes, team builds, understanding of an enemy composition and using it to your advantage, knowing map structure and its strenghts & weakneses, your positioning in team fights - We will cover it all in our Overwatch Beginner’s guide.

There are four types of different game modes in Overwatch. We will run through and explain shortly each one of them so you better understand how they work.

Control - You compete with an enemy team in BO3 match for an objective located around the center of the map - If you and your team contest that specific point it cannot be obtained until one of the team will be eliminated or won't be in the objective point for a specific amount of the time. Circle located in the top middle of your UI will show progress done by both teams - It takes a little bit of time to take it, therefore, you should always be in it for a while. The team wins the round when they will reach 100%. There is also a thing called overtime - Even if time ticks away at 99% for any team while being contested it won't go up to 100% unless you eliminate all the enemy players standing in it. The first team to reach 2 round victory wins the match.

Assault - In that game mode there are two teams: Attackers and Defenders. Attackers will try to take objectives away from defenders. First point is usually much easier to take as defenders are further from the spawn if you compare it to attacking team, however, the second point is very close to the spawn of the defending team and you need to make clean attack in order to take it - losing team numbers will greatly affect your success in securing that object. Taking point is split into 3 parts - each contains 33%- In order to progress your % same as in Control mode enemy cannot be on the point - this is the only way to progress it! Once you reach 33% it will lock on it so even if the attack will fail you will have that number in the next attack and the total amount of time will be reduced to take it. Once you will capture point you score a point, a team which will score more points or even more progress on a point will win the match.

Escort - There is two teams, attackers and defenders. Attacking team has to push payload from the start of the map to the end. When they stand nearby it moves - but only if defending team is not around it. It works in a similar way to other modes, as soon as Payload is contested it freezes and depending on team fight situation it moves either forward or backward.

Hybrid - As the name says its a mix of both Assault and Escort game modes. At start attacking team has to push and secure control point and as soon as they will do it the second part of game mode starts. The payload will be unlocked and you will have to push it all the way through the map to the end. When attacking team member escorts payload it moves. When defending team is nearby it freezes in the place and if they won a fight it moves slowly all the way back to the starting area. Each escort has its checkpoints and upon reaching it payload won't go back all the way but it will stay in it, also attackers spawn is closer to it - they also gain extra time for reaching it. A team which will reach more capture points or better distance of payload wins the game!

TEAM COMPOSITION OF YOUR AND AN ENEMY TEAM - ADJUSTING PICKS

Overwatch is an FPS game, however, it has many aspects at top of it and even if your aim isn't’ the greatest you still might shine in other parts of the game and progress through higher ranks by knowing important things about your positioning.

Depending on your role: Tank, Offtank, Support, DPS you have to position differently in a fight. We will breakthrough now on how to position effectively as each role.

Tank - You want to be usually at the front of your team, with your high hp & armor and defensive spells you can cover squishy teammates and take dmg which otherwise they would.

Offtank - You're less tanky compared to the tank however you still can take a lot of the damage. Your role is very similar to the main tank, Offtank wants to aid main tank on the frontline and help & protect your backline from taking damage. Off tanks can deal a lot of damage and its very important to maintain yourself in the battle on a good position. If your backline is being doved you have be able to get back and help them by peeling and using your spells in a good manner.  Body blocking, shielding, matrixing etc. They all are a very effective way of helping your team - it matters a lot! You must understand when its best to hold on to the frontline and when you should go back and help your backline.

Support - Almost always support is at the back positions, you can heal your team, soak damage, nano boost them, deal a lot of damage with discord orbs, give health / armor buffs or even resurrect fallen teammates, that's why it's very crucial to stay alive as long as you can - you should be behind your tanks but not too far so they can help you at worst case, don't isolate yourself from the team, usually, it will not end up well. You must understand how to effectively peel yourself from each other and at the same time heal your team - it takes a lot of practice and time but it's fun and worth of the effort!

DPS - Your role depends on character, there are flanking characters, snipers, steady consistent damage dealers, burst damage heroes etc. Depending on your pick you should be adjusting your position - You don't want to play Genji same way as Soldier:76 - when you switch your character it is not just a switch - even tho they are all called DPS characters they do have different roles. Understand and learn them to be deadly in the field of the battle.

Popular GOATS, 2/2/2 or even 1/4/2 - Each of the composition is played differently and consist of different heroes - Key is to understand what composition you play and what is your role in it. If you are winning usually you won't change much in your composition - why would you change something that works? Yes, you can gain little more effectiveness but usually, it's not needed. When you lose, however, it will create questions around your teammates and composition which have to be fixed.

Example: If your team is playing against GOATS and you run 2/2/2 (2 healers, 2 DPS, 2 tanks) its important to adjust your picks or create a different strategy when approaching next fight. For example, if you played Genji at the start it most likely won't be as effective as Pharah / Reaper / Soldier etc. into goats because he deals much less consistent damage and his dragonblade isn't that deadly with so many vital heroes and crowd control potential of the enemy team. Pharah, however, can easily deal dmg and there is not much threat for you - its great pick and great decision, same goes to Soldier, McRee, etc.

It is very important to know what's needed in a specific moment and what would give your team the biggest benefit. You might think - Well it makes sense but I'm not as good on Pharah as I am on soldier and yes its true, thing is - game has many heroes, if you are playing 1 character only you create limits and you block your potential - its important to at least learn basics of all your role characters - spend extra time and understand all of them or at least 3-4 characters - it will give you much more flexibility and winning potential. Practice makes perfect!

WHAT YOU SHOULD FOCUS ON

You might think, well Overwatch is a First Person Shooter so I will focus on AIM, well yes - Its very important but AIM is not everything. You have to be aware of your team composition, your enemy composition, character role&positioning in fights and much more! You will greatly improve your skill rating if you will think outside of the box and train all these important parts of "skill".
PS: Try to communicate with your team - it will greatly affect your chances of winning.

If someone is griefing or even throwing game you must focus on your improvement and your goals, eventually they will fall down and you will raise - try to learn from each game and practice things you can - even if game is lost you can still practice other things - like aim or map positioning and its different angles - it will pay off in the long run if you won't give up because you simply won't waste time with others if game is lost.

Even if you don't spend much time playing it doesn't mean you can't improve, its much more important to spend that time with quality - focusing on your weaknesses and practicing them with pre-made plan before so you will much likely get better results compared to someone who just grinds extra hours without even understanding what they do - yes you will improve your mechanical skill but at some point you will catch up and other things you developed will pay off. Plan your playing ethic, its very similar to other sports - there are business plans and game strategies for a reason in them :)


DO NOT LOOK AT YOUR STATISTICS AND RANK TOO MUCH

You are on your season-high, lifetime peak and you feel like you will drop if you play, well sad news - most likely you will, but not for long. You came in that place for a reason, you are great at the game! Don't hold and stop your progress, reaching higher ranks feels great but remember that there is always someone playing and practising while you are arent! In the long run, you won't gain much from just holding rankings and not playing, try to not care about your ranking digits and instead focus on your improvement in the game - I promise you, it will greatly reward you on the long run. 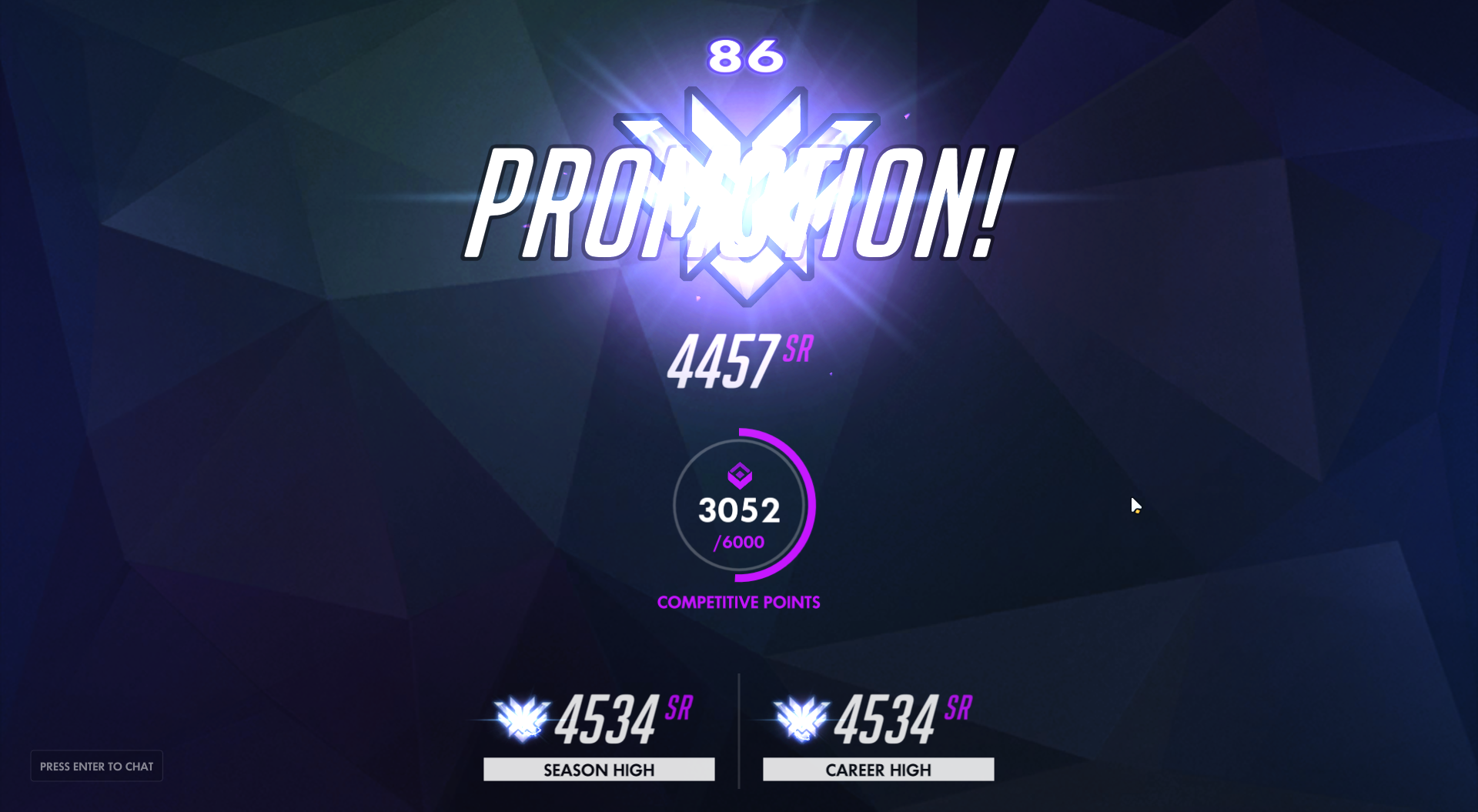 Our players peaked over 4700 and achieved top500 countless times - our experience and knowledge can be shared with you all with this and upcoming guides. If you would like to study game on a more detailed level and play with pros feel free to use discount code - (RUSHGUIDE7) for things like overwatch coaching. I hope you had a great read and we helped you with our Overwatch beginners guide.